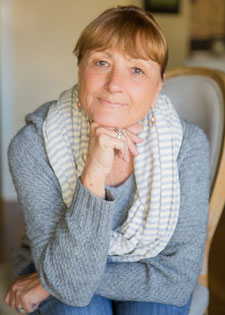 In 1990, Terry (Teresa) moved to the Northern New Mexico village of El Rito. She had spent the previous 10 years living in Santa Fe and had developed a real love for the art of the ethnic southwest. When she moved to El Rito, she realized that this artistic spiritual expression was alive and well. Having spent her life as a working artist, it was not surprising when she suddenly found herself inspired to develop her own version of this rich tradition. Nor was it surprising when she began to involve her son, Lorenz, because family involvement is traditional as well. As the years passed, it was obvious that Lorenz shared her delight in this process and together they have developed the rich array of artwork available here.

Over the years, Teresa and Lorenz have participated in countless shows and currently their work can be found in Galleries and shops all over the United States and abroad as well.

Visit TerryFavour.com to learn about Terry's book The Universe in Black and White --- A Plain and Simple Illustrated Guide to Time, Space, and the Meaning of Life.

Terry has also authored Grandma’s Saints and Angels --- a dear little book made up of childhood stories with images to color.